The Cerberus is a class of War Sloop Flagship in service to the French Undead and Spanish Undead fleets of Jolly Roger. These vessels can be found by Cutthroat Isle (Spanish) and by Isla Cangrejos (French). This ship is considered to be the 2nd most powerful undead flagship in the game.

Like other Undead War Sloop they carry eight Deck Guns and 10 Broadside guns. They attack with Firebrand and use Explosive rounds as Broadsides.

This ship actually appeared on the shipwright menu briefly following an update. It was removed due to the fact the option was not yet to be made available. 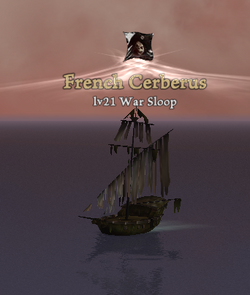 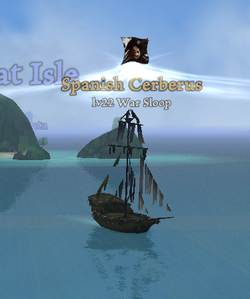 Retrieved from "https://piratesonline.fandom.com/wiki/Cerberus?oldid=323641"
Community content is available under CC-BY-SA unless otherwise noted.