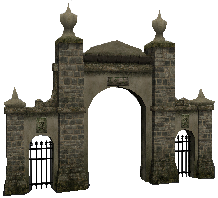 (N) A place where the dead are honored and put to rest. Usually, located near churches.

Usually a spawning point for skeletons, the cemeteries are the most common places to find them.

Bosses can often be found in cemeteries as well.

The graveyard here is off to the left as a pirate heads into King's Run. A number of Undead Gravediggers and a few Undead Bandits are amongst the tombstones. They are easy pickings even for starting pirates. The most dangerous threat in Port Royal's cemetery is the Undead Bandit. A perfect place to level up your pistol for budding swashbucklers.

Towards the back side, (near the gators) is good place to train for pirates from level 3-5. The other side of the cemetery (towards Rat's Nest) is good for levels 6-11. It is a good place to work beginning sword and pistol. The entrance to town is also right nearby for a fast getaway.

Ever since the beginning of the minor French-Spanish War, the dead privateers were placed in the cemeteries of Cangrejos and Cutthroat. Jolly Roger begun to raise undead hordes of French and Spanish, to further his dark goals. These undead lurk on the very cemeteries they were placed in.

Though once risen from the grave, most undead go in search of enemies in their service to Jolly Roger, but many stay in the graveyards - haunting the grounds they were buried in.

Retrieved from "https://piratesonline.fandom.com/wiki/Cemetery?oldid=322228"
Community content is available under CC-BY-SA unless otherwise noted.