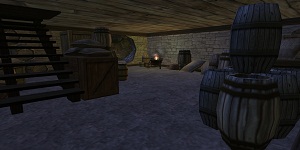 The Cave of Lost Souls, is a cave located at Raven's Cove near the firebats on the main island. It is accessible through a hatch in the ground. Currently, there is no minimap to accompany this cave.

Upon running aground on Raven's Cove, El Patron's crew mutinied with Foulberto leading the violent revolt. During the mutiny, Foulberto was able to escape through a small tunnel with a few of his strongest men and a large cache of weapons, mostly throwing knives, in tow.

El Patron was not about to let the leader of this mutiny escape so easily and with such a large stash of Rare and Legendary weapons at that! El Patron swiftly ordered that the tunnel entrance be sealed and personally cursed Foulberto and his mutineers to remain inside forever, trapped in the afterlife.

In an effort to break out of the cave, Foulberto consumed the souls of other crewmembers trapped in the mine but alas the curse placed on him was too strong. The only result of his violent outburst was to knock down a couple walls thus exposing the new cave to outsiders.

Retrieved from "https://piratesonline.fandom.com/wiki/Cave_of_Lost_Souls?oldid=326212"
Community content is available under CC-BY-SA unless otherwise noted.