The Voodoo Staff is a magical item which can send quick energy blasts or even more powerful special attacks, such as Flaming Skull, or Desolation. You hold down the Left-Mouse button or the Ctrl button to charge it up. The staff is a widely respected weapon and widely used around the Caribbean for its power to destroy many enemies at once.

Even more powerful than a Voodoo Doll, staves (or staffs, as some pirates like to call them) allow a pirate to use voodoo spells against enemies at a distance. Unlike the voodoo doll, the staff does not have to be attuned to a target first. Most of the voodoo spells are line-of-sight or have an area or aura effect.

The staff is not available until the pirate reaches Notoriety level 30.

Once summoned by Tia Dalma, the pirate then sets about a major quest to assemble, then charge up the staff as part of the Voodoo Staff Unlock Quest.

With the new loot and inventory system, there are now four different types of staves. There are the original Voodoo Staves from before new weapons were released (Cursed Staff, Warped Staff, Rend Staff, Harrow Staff and Vile Staff), and new types of staves such as Dark Staves, Nature Staves, and Warding Staves.

These auras radiate around the staff user. Any pirate inside the aura will benefit from these effects.

The pirate will receive the Cursed Staff as their first voodoo staff, but more powerful ones are available from a gypsy or by completing additional quests, or from Loot drops. There are not many loot drop staves but most of them aren't very good if you have mastered the Voodoo Staff.

Unlike a voodoo doll, which requires the user to attune their enemy or friend, the staff user just has to aim at their targets. The staff can however not be used to heal allies outside of the Nature Aura ability. To use a staff spell, hold down Ctrl or the Left-Mouse button to 'charge' up the staff before releasing the full spell. Each full casting takes voodoo power. The stronger the spell, the more voodoo it takes and the longer time it takes to cast.

If the spell is interrupted, or the user releases the attack key before the spell is complete, it 'fizzles' and there is no effect at all.

A user can also quickly click the attack button to release a Blast. Blast only deals marginal damage, but restores 50 voodoo per hit.

It does take time to charge most staff attacks, so when using it be aware that the enemy will attack you while you are charging unless the enemy is killed with one attack.

*There are no Crude Staves available in the game.

The staff greatly enhances the kinds of hexes and abilities the pirate can use with their voodoo power. 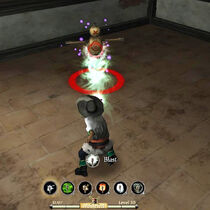 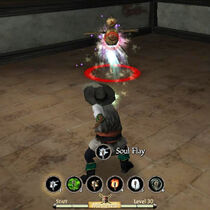 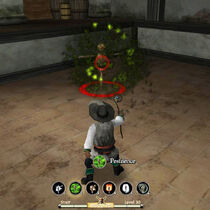 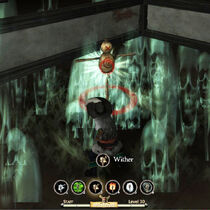 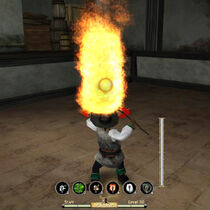 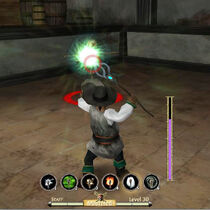 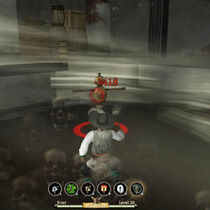 Most of the Hexes a pirate can use with a voodoo staff are more intended for attacking a group of enemies from a distance, since the user does NOT have to attune it to them.

In addition to hexes the pirate has to cast, the Voodoo Staff also can provide abilities that, once learned, are always in effect. These abilities can also apply to the user's Voodoo Doll as well.