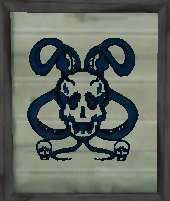 Pirates don't always wear their hearts on their sleeves, but they do wear their personality on their skin! Tattoos are a pirates way of expressing feats, loyalties, and loves.

Tattoo artists can be found all over the Caribbean, working out of Tattoo Parlors on Port Royal, Tortuga, Cuba, and Padres Del Fuego. For the right amount of gold, they'll turn any buccaneer into a canvas for their art.

Parlors are recognized by the Tattoo Sign above the door. Press SHIFT to enter. Once inside, approach the artist and press SHIFT again.

An interaction menu will pop up. Available tattoos will be listed, categorized by the body part they will be placed on (Face, Chest, Left Arm, Right Arm).

Note - Currently no tattoos can be placed on legs or back.

You can preview how the image will look, by clicking on the picture. The tattoo will appear on your pirate. To buy, just click Buy to add it to your shopping list on the right. Click OK when finished. 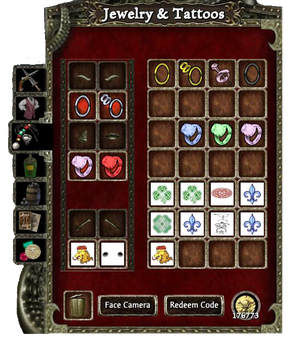 Tattoos are kept in a joint inventory with Jewelry. A pirate can have up to 28 tattoos or pieces of jewelry, in addition to the one's being worn (Face, Left Arm, Right Arm and Chest) To obtain any more, you can throw them away or sell them. (Yes, you can sell tattoos!)

To change or sell tattoos, press I (Inventory) and go to the Tattoo tab. Then, simply drag the image to the Arm, Face or Chest square. The new tattoo will automatically appear on your pirate.

All artists have the same selection of images, but they can be found at numerous locations.

These works of art are available at any Tattoo Artist for the cost listed. Men will have the image very large across their entire chest and stomach, while on women - some images appear smaller on the upper chest, usually the right side while others will be larger in the upper middle of the chest.

These tattoos can be added to either arm, for men or women pirates. The selection varies from shop to shop.

Special events or holidays may also mean new artwork is available for the pirate to add to their body art collection. These images are usually only available for a short time.

The female pirate versions of these tattoos are the same images but the chest tattoos are smaller, placed on the left side of the chest. The arm tattoos are on the forearms instead of upper arm.

These holiday tattoos are only available from Adam Goodprice during the Hollowed Woods Event.

Special Fortune Quests allow the pirate to obtain tattoos that the artists will add for free. And they can be purchased later from Reward Vendors who work in the tattoo parlors.

Some tattoos can be unlocked by typing in a redeem code, but so far, only one, which you earn if you complete the Call of the Kraken Minigame, has been available.

The tattoos displayed below are not in the game and were found in the game's Phase Files. Although they appeared in there, it does not indicate when they are coming into the game, or if they are at all.

The scars displayed below are not in the game and were found in the game's Phase Files. Although they appeared in there, it does not indicate when they are coming into the game, or if they are at all.