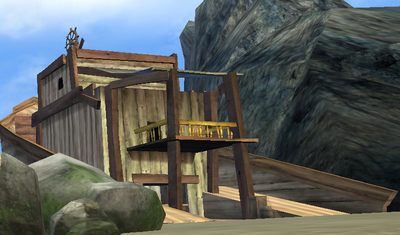 A pirate without a ship is like a ship without a rudder, considering that the act of piracy is the theft of or theft onboard ships.

To that end, Shipwrights are the men and women who build and maintain the many pirate and privateer vessels that plow these waters. They can be found on all the main islands and privateer islands.

Shipwrights are located in the most unique and noticeable structures; an upended ship's hull right on the beach.

To talk to a shipwright, just approach their counter and press SHIFT.

An interactive menu will appear. Just click on what you wish to do.

Shipwrights of the Caribbean

On the shore of the main islands, the shipwright's stand can be clearly seen as the large, upright ship's bow. Some new shipwrights have also set up shop right by the water.

(*Can be found in the open near the docks, without a Shipwright Building)

All pirates start with a Light Sloop. But, other classes of vessel are made available as the pirate's Sailing skill increases.

Game Note - In the original Pirates Online, Free-to-Play players could only have Light Class Ships.

Just pick the ship of your choice, as long as you have the gold and skill.

Once you've picked your ship, you will be prompted to christen it with a name. Just pick a first and last name from the two lists.

Or if you're not too particular, just click Random to mix and match.

In The Legend of Pirates Online, a feature was added to allow pirates to rename their ship.

Select the Rename Option from the Menu. 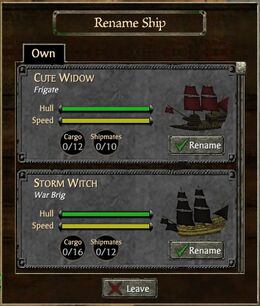 Select the Ship to Rename. Then, select the new name from the original Ship Name menu. Click Submit.

The Shipwright will prompt a reminder that Rename comes at a cost. 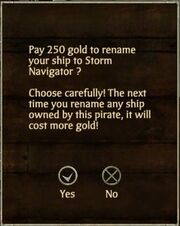 The prices for Rename are similar to the costs a Trainer charges to reset your skills. So, while trying to keep the Navy guessing where to find you, the price will go up.

At some point, a pirate may outgrow an old ship, need some quick gold, or want to trade up. From the Options Menu, click Sell - then select from your ship menu. The game will ask if you're sure that you wish to sell. Then you will sell the ship for half the price that you bought it for (you will not credit for any Ship Customization).

Once a ship is sold, it must be re-purchased at full price. Shipwrights don't haggle.

Pirates always seem to bring their ships back with torn sails, cannonball holes, fire damage - you name it. Shipwrights are the quickest place where a vessel can be repaired. After all, you want it done fast, take it to the experts.

Note - Always best to check your ship's health before departure. Repairing is much cheaper, than salvaging a wreck.

From the Options Menu, select Repair. Your ships will be listed, showing the ship's damage status. Click Repair. A pop-up will show how much it will cost in gold to fix your ship or salvage a sunken one.

Note - If you do not have enough gold, you CANNOT do a partial repair.

If the vessel is perfect condition, the Repair button will be grayed out.

Pirates can choose to Customize their ship at the upgrade menu from any shipwright. Players can change their sail color, and put an emblem on their sail. Players are also able to have special Hulls and Rigging, that can only be upgraded if the player has a certain amount of resources and gold.

Often, a shipwright will ask a pirate to perform a Fortune Quest for them - with gold rewards for their efforts.

Shipwrights offer pirates a chance to earn some pocket money repairing vessels for them. Stationed around each Shipwright stand are three repair tables, marked with signs. These signs indicate the difficulty of the repairs needed.

Each table allows the pirate to practice their ship repair skills. There are five games to challenge a Shipwright-in-Training

The Repair Mini-game Menu will appear. To complete repairs, the pirates must finish all the challenges:

Once the jobs are complete, the ship's hull and sails will be repaired. The pirate will be told what their total time was and the amount of gold they earned. The game will reset as another ship pulls up for repairs.

The pirate can press ESC at any time to stop repairing.

On the Test Server, six new ships, the Ship of the Line, the EITC Warlord, the Undead Cerberus, the Phantom, the Revenant, and the Navy Kingfisher, were briefly added for purchase before being removed. Later, the game developers explained that this was a mistake and was never intended for release.