Quests are missions in which your pirate is asked to perform various tasks for either reputation, gold , clothing , weapons, or other collectables. They have specific goals and are listed in the pirate's journal once shown upon and accepted. Upon completion, the pirate will receive a reward of some sort. This can be in the form of notoriety points, gold, special objects or new weapons. They are given by the main story characters or by island townspersons.

In Pirates of the Caribbean Online you have six types of quests:

Story Quests advance the overall storyline in the game. By completing these chosen quests you will be rewarded with notoriety points.

Fortune Quests generally have gold and treasure as rewards, and are given usually by townspersons and occasionally by story characters. Most of them require some fighting and sinking to do.

Treasure Unlock Quests unlock different Treasure Collections, which you can collect items for by looting.

Weapon Unlock Quests unlock a new type of weapon that pirates are able to use. Pirates are given Swords and guns without an unlock quest, however all the others are only unlocked with a quest.

Weapon Upgrade Quests are special quests that reward pirates with a powerful weapon. These quests unlock when a pirate gets to level 15 or 20 in any skill except Grenade, Potions, and Fishing.

You can check your quest progress by going to your journal: pressing J on your keyboard, or click on the sea chest and then on the journal (book) icon.

The usual pirate will likely have at least several quests running at the same time. To help locate a specific goal, the pirate can go to their journal and select a quest goal by clicking on it. This makes it to where you are only on 1 quest objective.

Also, some quests can be discontinued from the journal by canceling them. Story quests, teleportation access quests, weapon upgrade/unlock, and treasure unlock quests may NOT be canceled.

Remember to always do the teleport quests first, so they may help you on other quests. It's a lot easier to teleport island to island instead of sail. 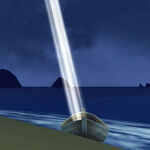 When the pirate is near a tracked quest goal (a location, character or enemy), a ray of light will shine down from the sky onto it.

If there are 2 or more enemies in sight, the light will fall on the closest one but a star will appear on the enemies in the mini map. This can help a pirate. There used to be a pointer to tell you where to go but they removed it from game. 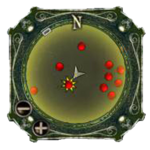 A pirate's compass also aids in finding quest goals by pointing an arrow in the direction of the goal or placing a sunburst over an enemy or the item on the compass screen. This makes finding the next part of your quest a lot easier. It helps the people who don't have the game memorized.

As well as the Compass, the map also gives you a broader chance of finding where you want to go.