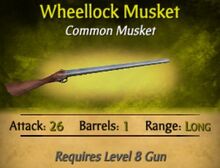 A Musket is a single-shot, muzzle-loaded, smooth-bore firearm. It is a long-ranged weapon that can also mount a Bayonet attached on the front. The musket can do significant damage at medium and long range, however it cannot be used at short or point-blank range.

*Currently, there are no Legendary or Crude muskets

In Pirates Online, the Musket uses the Gun skill and all the same ammunition types as a pistol or blunderbuss.

Improved and specialized ammunition is also available as the pirate improves their ability.

These skills improve the pirate's abilities. Once they are learned, they are always in effect regardless of what type of weapon you wield in battle.

Royal Navy Cadets, Guards, Veterans and Dragoons also carry these weapons. They never shoot at pirates because they have orders to bring pirates in alive.

Instead, they opt for using the bayonet, or smashing the pirate with the butt of the gun.