Pirates of the Caribbean Online is primarily about earning Notoriety by completing quests, defeating enemies and developing weapons skills.

However, there are features that a pirate can play that are NOT part of the chapter quests or weapon leveling. In these Mini Games a pirate can earn extra gold, make magical potions, repair their ship, etc.

Need gold? Looking for a break from questing, pillaging, and plundering? Use the Lookout system, or stop by any tavern. Master your tell and learn to cheat like a pirate.

Most taverns offer a game of chance. Just approach the gaming table and a label will tell you what game is in progress. Join in whenever you wish, and keep track of which taverns offer which games.

Undead Poker is similar to Tortuga Hold 'em except you take damage when you lose. The only places to play Undead Poker is the Undead Poker Shack, in Rat's Nest on Tortuga or Decrepit Shop in the Hollowed Woods. 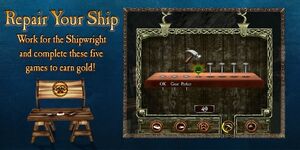 Some folks believe Ship Repair is a lost art. Well, in these parts that lost art was quickly rediscovered – and revived -- with the massive influx of damaged and destroyed vessels along our shores. Mastering the essentials of ship repair is as simple as finding a Shipwright.

To get started, locate a ship repair table near any Shipwright and start hammering away. You can also help repair ships while at sea. Whether it be sawing planks, hammering nails, patching leaks, scraping barnacles off the bottom of a ship, bracing hulls, or even bilge pumping, help fix Pirate ships for fun and for profit! That’s right, you can get gold for repairing damaged vessels – and plenty of ships need fixing! 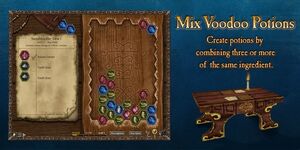 Need a little mischievous voodoo in your life? Potion Brewing is sure to add a devilish twist to any Pirate’s adventure. Baffle your enemies and amuse your friends with the array of potions found on the islands. You can mix up potions for just about everything – boost your speed with Swift Foot and run like the wind or break wind with the Flatulent Fizz.

Brewing up your own potions is remarkably easy. Visit a gypsy on any island, go the potion table and select a recipe you desire. Then … start whipping up the ingredients – but be sure to follow the recipes closely -- and before you can say Tia Dalma, you’ll find yourself spoofing your friends and foes alike!

Potions are kept in a Potions Pouch and can even be sold. 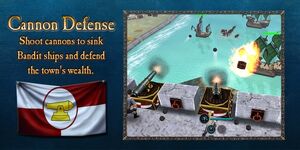 Hard to believe, but Cannoneers are in high demand by the Navy! They’ve installed Cannon Defense outposts on Port Royal, Tortuga, and Padres Del Fuego to fend off renegade Bandits. Look for the special red and white flag with the cannon logo on it. Use the mini map (press “F8”) to locate them.

These Bandits have been stealing our gold, and we must defend our town’s wealth! The Navy can’t handle these powerful cannons because they’re so inept, so it’s up to us … the Pirates!

The outposts are fitted with 12 Navy Cannon ammo types like: Hot Shot and floating Mines. When Hot Shot is used, it sets your enemy’s ship on fire and floating Mines shred enemy hulls. Sink the invading Bandits and you’ll see rewards.

Up to four Pirates can play in a single game. See how long you can battle the Bandits. If all of the town’s wealth is gone, the game is over. You’ll receive Gold and Cannon Rams as rewards for your skills, so blast away. Plus, the more damage you do … the more Bank Notes you get to buy more ammo. Watch out -- if the Bandits steal too much wealth, they’ll also start taking your Bank Notes as well.

Your Pirate’s passive cannon skills like Shoot, Rapid Reload and Barrage will increase your rate of fire and damage in Cannon Defense. You can also use your Cannoneering potions to increase your chances of defeating the Bandits.

Interesting Fact: For each wave of Cannon Defence completed, you will earn one reputation for your cannon level. 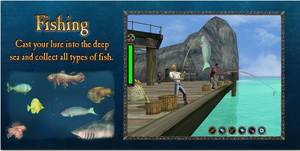 Something’s awful fishy in the Caribbean. Pirates have always told of strange fish sightings around these parts, and we believe these bizarre tales just may be true.

An abundance of spooky fish can be caught off the docks of Port Royal, Tortuga, and Padres Del Fuego. Some say they are a bad omen. Others say they are a result of undersea volcanoes. For adventurers like yourself, it means only one thing – good fishing!

For experienced and novice fishermen alike, visit Old Greg on the docks for a bit of advice on the best way to catch these critters. Old Greg has seen and heard it all -- and if you possess an ounce or less of interest in angling, you’re in luck!

He’ll yarn on about catching all types of sea creatures and point you in the right direction to match his seafaring deeds. With good fortune, soon enough you’ll reel in a strange whopper, launch your own Fishing Boat, master Fishing while at sea, and maybe even capture an elusive Legendary Fish.

But be warned -- keep your wits about you or you may find yourself the tasty bait to one of those legendary creatures!