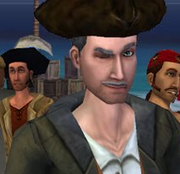 Marceline is the pirate guild led by Captain Walter, which made its efforts to defeat Lord Beckett and Jolly Roger very well known.

The Marceline is also a guild of Game Masters that involve themselves in role-playing events to promote storylines in Pirates of the Caribbean Online. Regular pirates CAN NOT join the guild.

The guild first appeared in the fall of 2008. They have also appeared at several events, such as the Feats of Strength Competition and even held many Tavern takeovers where they told pirates of upcoming news and new challenges.

They also hold Founder's Feasts, Mardi Gras festivals and Brethren Feasts for pirates to enjoy. Sir Victor Mayhew appeared on the docks of Port Royal telling pirates of a Harkaway ship and a treasure fleet. They also had a fathers day celebration along with the " Let's sink em' all! " event.

Captain Walter gave hints at EITC conspiracy theories of Island Destructions and Reconstruction, and he himself witnessed such an event (aka Tortuga's destruction), where his crew thought he was an omen and almost threw him overboard.

Before the destruction of Padres, the Marceline guild organized a fleet of pirate ships to take on the suddenly enlarged armada of East India Trading Company ships. This was a successful event, and after the destruction of Los Padres, the EITC's Black Guard put up arrest warrants for the guild's head Captain Walter, and even began interrogating pirates. This led to several skirmishes between both sides.

When the caves under Jolly Roger were dug deep into, their mystic Sandra Tew saw this happening and fainted when so. This Cave Expansion led to a growth of undead.

She along with other members warned pirates not to trust the newcomers to Port Royal, the Casa de Muertos, who gave pirates rewards for retrieving artifacts. Their pleas were justified when the Invasions of Port Royal began, where they openly participated along with pirates. To prevent an invasion of Tortuga, they led pirates deep into Tortugan caves in search for skeletons, where they coincidentally encountered the Casa de Muertos, whom they chased out into the forests.

The Marceline also discovered the eventual invasion of Padres and later stole aboard East India ships bound for Raven's Cove - where they witnessed the fight for El Patron's Lost Weapons firsthand.

Recently, Captain Walter and his ship - The Magic, disappeared. The vessel was discovered crashed ashore, but no sign of life. Later, after being confronted by Marceline members and a collection of outraged pirates, Captain Ezekiel Rott admitted that Walter met his fate at Rott's hands. Truly a tragic day for the Marceline.

However first mate Captain Xavier Hench took over the reins from the deceased Walter, and is currently leading the Marceline in their various efforts in the Caribbean, as Guildmaster.

Presently, the Marceline has seemingly gone underground, and has not made any public appearance in years. However, it has recently been discovered that several of their members have silently chosen to retire from the pirate's life, and now help their fellow outlaws and scoundrels by hosting several Meetup Locations for pirates to gather.

These are known members of this guild and their known ships. Currently, Marceline is not accepting any new members.

Marceline, Missouri is the home of the Walt Disney Museum. Though only his family's home for a few short years, Walt always considered it to be his hometown. He spent his formative young years (4-8) here. Likely, this is where the origin of the guild's name comes from.