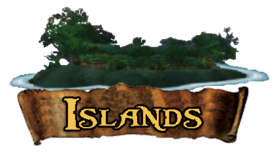 A majority of the game action takes place on the various islands in the Caribbean. The main islands have settlements, including merchants and townspeople. The other islands are the Wild Islands and the privateer islands.

The only ways to reach another island is aboard ships, a teleportation totem or by teleporting to a friend, crewman or guildmate.

Islands in Pirates of the Caribbean Online include the following:

These islands have towns on them, where the pirate can interact with merchants and other townspersons. They are also where a majority of a pirate's quests occur. Invasions also happen on these islands only. Main Islands also have a teleport totem, and a jail.

These islands have towns on them, but are notably smaller than the main islands. They are not considered wild islands. To qualify, the island needs a jail, and a teleport totem. The only exception is Kingshead, which used to have a teleport totem and meets the fort requirement.

Wild Islands are unsettled land masses. Most have populations of cursed creatures, and some are home to various undead. Wild islands have no qualifications, but they are generally small and covered in enemies. The Navy and EITC has no presence on these islands.

Strongholds for the French and Spanish forces fighting for control of the Caribbean. To join Ship PvP combat, teleport or sail to a privateer island. When you leave the island by sea, you will automatically join the French or Spanish fleets.

There are a few locations referred to in the game, but the player does not get the opportunity to visit them yet or can only visit limited areas. Some of them appear only in the movies.

There are rock peaks in between the privateering islands in the Mar De Plata. When close to them a message saying "You cannot dock on this island!" appears.

Many islands have been scrapped from production before making it out to the Test Servers and beyond. Only a few have been able to be discovered by the players.

Islands that are currently in development and may or may not be released in the future.