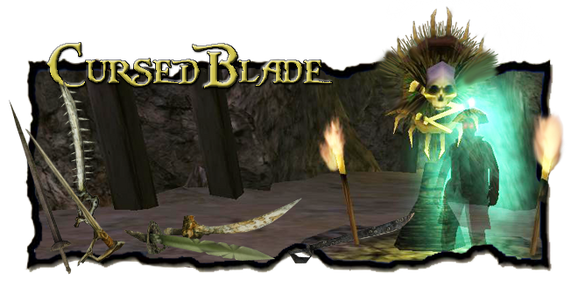 Cursed Blades include some of the most powerful weapons available in the game, but they are also cursed by dark powers, and you may want to check your hand (/hand) from time to time if you wield them. Cursed blades do not have their own set of combo skills, but either Cutlass, Broadsword or Sabre skills instead, that can still come in handy!

The first cursed blade that pirates could obtain was the Cursed Seafang Blade, which was obtainable by a Redeem Code. Meaning that this weapon isn't obtainable anymore to users. Later, 30 more cursed blades became available, including 5 Legendary cursed blades. These swords can only be obtained after completing the Raven's Cove Story Quest after notoriety level 30. Other than the Cursed Seafang Blade, cursed blades are only looted in Raven's Cove and on Isla Tormenta. Abilities of the cursed blades include Cursed Fire, Cursed Thunder, Cursed Ice, Dark Curse, Freeze Sweep, Shock Sweep, Inferno Sweep, Hurricane Slash, Monkey Panic, and Blood Fire. Quite a few of these abilities can only be found on Cursed Blades. The blades are also followed by a black shadow, all except for The Emerald Curse (green shadow), The Sapphire Curse (blue shadow), The Ruby Curse (red shadow), and the Blade of the Abyss (red shadow).

Unlike other weapons the cursed blades are only in three classifications, Rare, Famed, and Legendary. You'll find no Common or Crude weapons here. They also have no Weapon Groups for the blades. Many Cursed Blades also appear to be made out of some sort of bone, like Bitter End, or Doom Rattler. One last thing, you must have patience, finding these Blades isn't easy and it will take some serious game play to start collecting these highly prized weapons. They are gained by luck and determination. All Cursed Blades require you to be level 20 or above with your sword to use, but are very deadly.

Note: You must finish the Raven's Cove Story Quest before you can get ANY cursed weapon (aside from the Cursed Seafang Blade which is no longer available), and get the Evil Curse of Doom. The lowest possible Sword level you can have to use any Cursed Blade is 20. If you have done the quest, and you become basic, you will be able to find cursed blades, but you will be unable to use them. Cursed Blades also have notably low resale prices.

The Cursed Blades look very similar to the swords used by Davy Jones' henchmen in Dead Man's Chest and At World's End. In addition, the player also receives a "Evil Curse of Doom," similar to the Black Spot, when they touch their Cursed Blade after defeating El Patron. This could mean that in the next Story Quest chapter, the player could be being hunted by the Kraken and maybe even face Davy Jones himself.