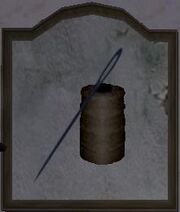 Pirates' garb can be anything from worn rags to fancy swag, and they might say something about his or her personality. Their sea chest can store quite a wardrobe of various items to choose from. All clothing may look different depending on a pirate's height, width, and gender. Some other types of clothing can only be found in loot. Clothing comes in Crude, Common and Rare. Common and of the Rare variety. Currently there are no Famed or Legendary types of clothing.

These clothes can be purchased from Peddlers, who are found on Tortuga, Padres Del Fuego, Port Royal, and Cuba. They are only available for a limited time (usually 2 months). Monthly Peddler sets change their order each year, in November. Occasionally, a set is discontinued, to add in a new one. Some pieces of Peddler outfits may additionally be found in loot year round.

These clothes can be purchased from Peddlers, who are found on Tortuga, Padres Del Fuego, Port Royal, and Cuba. They are only available for a limited time (usually 2 months). Monthly Peddler sets change their order each year, in November. Occasionally, a set is discontinued, to add in a new one. Some pieces of Peddler outfits may additionally be found in loot year round.

Peddlers restock their catalog with one of the below Peddler sets every month. A Peddler outfit can only be released once per year (Although some sets have been released more than once in a year), and may not return next year, so grab 'em quick!

These sets are released randomly, or during a one-time game event. They are usually sold for a very short time, and usually only once, so grab them while you can mates!

These sets are only available from the Peddlers during specific Holiday Events. They are usually in stock for a much shorter time than normal sets, spanning just a week, or in some cases, only 2 days.

Holiday-Style Peddlers Sets are holiday-themed outfits sold near Holiday event periods, but last 2 months on the normal monthly Peddler track, instead of the holiday track where the outfits leave along with the event.

Two Peddler Sets have pieces from their collection randomly drop in Loot all-year round.

In order to get these clothes you must work hard at getting your Infamy ranks up. Visit a PvP Infamy Rewards merchant to see the specific levels. You can NOT preview these items until you are a high enough Infamy rank. Just work harder to increase your rank! For some of these clothing pieces, it can be very difficult to get to the appropriate ranks needed to unlock them. You can find these merchants on Isla De La Avaricia, Ile d'Etable de Porc, and Devil's Anvil in Barbossa's Grotto.

Quest clothing is clothing ONLY available by doing a quest.

If you win a bonus of 5,000 gold playing Undead Poker during the Raven's Cove Story Quest, you will receive one of these special hats depending on your gender. Magenta Ostrich Hat and Purple Cavalry Hat are rare and can be very hard to obtain to some players.

Although enemies will commonly drop simple store clothing, occasionally one will find special items that can only be found in loot. These items are known as Loot Clothing, and can be as hard to find as Famed or Legendary weapons at times. Some of these, such as Chill Boots or Pursuit Boots are of a completely different style to any item that can be found in a store. You can't get these in color variations (Although you used to be able to get circus pants in different colors), yet they can look great on the right pirate! Others are of a simple clothing styles that can be found in stores, but when found in loot may come in brighter and more unique colors. Some of the most sought after loot clothes are items that are dark black. They are mostly Crude, but can be Common or even Rare.

Note: Some clothing items that you can buy from a tailor may also be found in Loot Drops. These may or may not be rare, usually crude ( also known as Common Items ) items end up in Tailors.