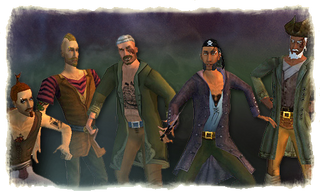 The 'Casa de Muertos' is a pirate guild, led by founder Captain Ezekiel Rott. He and several members can be found trying to recruit pirates to perform various dubious tasks for them. The members of the guild are played by Game Masters for Role-Playing events, and as NPCs for quests.

Note: It appears that almost half of the guild's men have a special tattoo on their chest near their heart.

Ezekiel Rott and his guild, Casa de Muertos, are rumored to have been involved in the skirmish off the coast of Padres Del Fuego with the East India Trading Company, in which the guild supposedly died. Apparently, Jolly Roger offered them immortality if they served Jolly's cause, to which Rott agreed. The plan involved something as dark and bold as taking over the Caribbean, and ridding it of all pirates. To begin, he set an agenda for them.

This mysterious and dubious crew landed up on the shores of Port Royal with huge stocks of gold to make wandering pirates offers to do several favors for them. They asked the pirates dig up a number of artifacts and hand them over to the guild. These artifacts were kept in Port Royal long ago by mystic Tia Dalma and other voodoo practitioners to keep off Jolly Roger and his army from entering the city.

The Casa claimed that their 'sponsor' was a supernatural artifact dealer. They also paid more money for stealing the Royal Navy's defense plans ("in case of a French or Spanish invasion") and for drugging Navy soldiers. After their deeds were done, they left and assured pirates of good things to come.

This would eventually lead to a horrifying Invasion of undead troops.

Rott and his men were given what they were promised - immortality. In spite of this, Ezekiel Rott still serves Jolly Roger. He had appeared during the invasion of Port Royal where he ordered the undead to kill the pirates or "Jolly will have all our heads!" He even revived a knocked out person, showing the gentler side of Jolly Roger, to inspire more pirates join. While this was most likely the case, there are some who believe that Rott and his crew simply regret their siding with Roger and will try to help the pirates.

Before the Tortuga invasion, he appeared and offered pirates a parley - to serve Jolly Roger, which was turned down by many pirates. He warned then of further invasions and a powerful weapon of Jolly Roger to unleash his wrath (some sort of new cannon, which was later revealed to be Powder Keg Runners). He even knocked out a pirate who attempted to kill him. This was then followed by the Tortuga invasion.

They have made several appearances since. Members of the Casa de Muertos Guild seem to have no qualms about openly supporting Jolly Roger and serving alongside his skeleton warriors.

In several cases, during the cave raids of Tortuga by Captain Walter and the Marceline guild, the Casa's members appeared and attempted to intimidate the pirates who opposed them by threatening to unleash the evil power of Jolly Roger unto the Caribbean. They (as Ezekiel did) attacked anyone who stood up against them. They usually ran away from the angry mob of pirates, into the forests to escape. At times, when Ezekiel Rott appeared, he spoke directly to individual pirates (via Chat Whispers), and if a heated argument started, he would knock out the persons involved.

The Casa de Muertos arrived on Padres del Fuego, with a new set of quests for pirates. They appeared in several GM events, talking to pirates, urging them to do the given quests. Any pirates who took out their anger on the Casa were knocked out.

The Casa de Muertos also talked about their alliance with the East India Trading Co., also asserting their desire to double-cross the Company for its nefarious attempts at stealing the weapon caches and trying to place it in Raven's Cove.

Later, the Casa de Muertos arrived with Black Guard leader Captain Ellison Shaw, in a show of their combined strength. The Casa apparently still planned to eliminate their mutual ally, for the sake of the victory of their higher authority Jolly Roger.

Rott began offering a sizable reward to those pirates willing to undertake the quest for El Patron's Lost Weapons.

After the alliance between the EITC and Jolly was broken, both forces fought at the true location of the weapons - Raven's Cove - for the weapons. Both sides walked away with a hefty amount of the weapons.

The Marceline Guild began revealing the history of the Casa de Muertos. The small settlement of Minertown was destroyed by Ezekiel Rott's betrayal to Jolly Roger. Just after revealing this, Captain Walter had disappeared. All fingers pointed to Rott, as Walter and Rott had become enemies - after Walter criticized Rott's role in the events of Minertown. Rott later confessed to stowing away on Captain Walter's ship The Magic and challenging him to a duel. He claimed that Walter lost due to a weakness of Walter's sword skills. This was hard to believe, for Walter was a master of the cutlass.