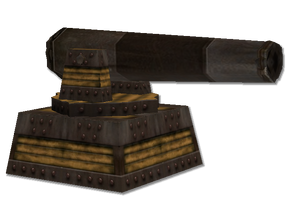 Traditionally, a Cannon Ram was a round piece of wood, commonly called a box, which drove home the powder and ball down the cannon barrel to the breech. It was fastened to a rod approximately 8-12 feet long.

In Pirates Online, a Cannon Ram is a piece of equipment that boosts to a specific cannon skill or reduces reload time. They can sometimes be found in loot, but are most commonly found in the Cannon Defense Mini Game and Fishing. Famed cannon rams are primarily found in Cannon Defense after level 60.

To use a Cannon Ram, a pirate must place it in their Item Slot of the Weapon Belt. Only the effects of the ram actively in the belt will be applied. The effects are passive, so a pirate does not need to activate them.

A Cannon Ram's effects can also apply to the pirate's Broadside attacks. (Ex. A ram that boosts Firebrand damage will boost the broadsides of a Firestorm class ship).  This does not apply to other passive skills like Rapid Reload.

Boosts tend to increase a specific ammunition skill or can grant a special ability. Some are used for different activities like SvS or plundering.

Note: There are currently no Legendary Cannon Rams currently available in the game.