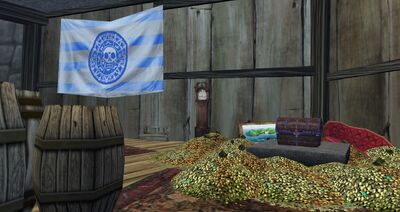 Capture the Chest is a Pirate vs. Pirate crew battle, similar to classic Capture the Flag events in other games. The goal is to protect a chest of booty held by your team of pirates in your base of operations while trying to steal their chest of loot from their hideout.

The team that scores the most stolen chests in 10 minutes time wins the match.

Brawl for the Booty 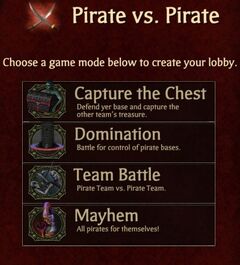 Select Pirate vs Pirate from the Lobby (L) menu. Choose Capture The Chest.

The pirate creating the Lobby can set the Capture the Chest game to Private or leave it Public, meaning any player looking in the Lobby Menu can join the game. For Private mode, the pirate starting the Lobby (Host) must send invite codes to those playing.

Teams are divided up automatically as pirates join the Lobby, but the Host who created the Lobby can change the teams. Once teams have been selected, the Host can the press Start.

After a server is found, the two groups arrive on opposite sides of the battlefield. A colored coin icon appears over your head so you can tell friend from foe (Red or Blue).

A countdown will begin play action and a 10-minute Timer will commence.

Pirates will first arrive at their team's home base. Teammates and enemies will appear on your Compass.

There will be a running timer and combat will continue until the 10-minute Timer reaches 0 seconds. 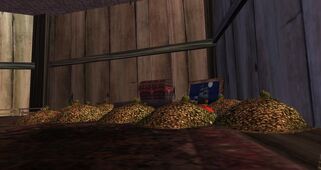 Pirates take to the battlefield in two teams, who then slug it out while trying to obtain the other's Treasure Chest. This chest is located deep inside the team's base. It must be CARRIED by a pirate from the enemy base to their own base.

During Capture the Chest, the player pirate becomes Undead like in PvP. 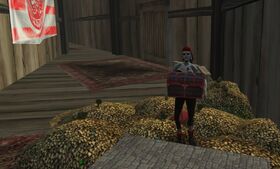 The pirate carrying the chest is unable to use any weapon, which makes them more vulnerable to attacks from defending pirates on the other team.

If you die while holding the chest or drop the chest, it will be locked in-place for a few seconds before anyone else can pick up or return the chest. After the chest lock is removed, it can be picked up again or returned back to its base. Another teammate can pick it up and continue on. 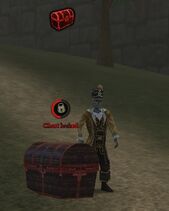 But, if an enemy reaches it first, the Chest returns to their base.

You can drop the Chest by pressing Shift to fight off an enemy.

Each time the Chest is stolen, dropped, returned to it's original base or successfully reaches an opposing team's base, a status announcement all appear on-screen alerting players of what happened.

Each successful stolen chest earns the Team points. The winner is the team of pirates with the most points at the end of the round.

While fighting, you will be allowed to Heal teammates using your Voodoo Doll - but not Revive. Pirates who "die" restart back at their team's hideout. You will regain health as normal when not taking damage.

Upon arrival in the arena, all pirates will briefly have a shield of protection around them to prevent an enemy attack while the player gets oriented. But, be ready! It only lasts a few seconds.

Hint - Be sure to set your weapon belt BEFORE accepting the invitation, otherwise you will have to use the weapons you have already set.

Capture the Chest battles occur away from the main islands, where innocence bystanders will not harmed by the chaotic combat. Currently, there is only 1 Capture the Chest map - Marauder's Cove. 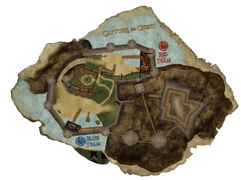 ﻿Like Infamy in PvP and SvS, pirates can earn Objective Infamy ranks for their ability to score points and defeat opponents. These ranks are earned by receiving points for each kills you make or points scored. These points accumulate each time a pirate plays Capture the Chest.

Also, like PvP and SvS infamy, that earned rank can unlock special items which be purchased at Infamy Vendors around the Caribbean - like Rose Cabinmenace.

A pirate player will have to participate and win rounds of Capture the Chest as part of the Marauder's Cove Conquest quest. This quest will only be open to pirates Level 30 or higher. Once unlocked, visit any Shipwright stand to begin.

Completing the quest will grant the pirate a new Treasure Chest emote (/chest).