Captain Ezekiel Rott is the Guild Master of the Casa de Muertos (Spanish for 'House of Death'). He is played by GMs during events and appears as an NPC during quests, just like the rest of his guild. He and his crew could be found on the beach of Port Royal during September 2009. They were recruiting pirates and paying for their services to retrieve some artifacts. However, Captain Walter of the Marceline Guild had been warning pirates that there be something more nefarious to Rott and his crew. He has a Notoriety 47 with 1079 Reputation points and equipped with 2 sword weapons (two cutlasses) and 2 shooting weapons (blunderbuss and pistol).

Ezekiel Rott was formerly an elder living in Minertown, now known as the Rat's Nest. He was originally supposed to watch the town and warn it of an invasion. As Jolly Roger was planning for his invasions, he needed an opening to access the island of Tortuga. Secretly, he approached Rott and made him an offer. Using his voodoo powers, Jolly would grant Rott immortality - at the cost of the village's protection from him. Rott agreed and the citizens of the town soon met a horrible fate.

The undead that pirates now encounter in the ruined Rat's Nest were once the peaceful citizens of Rott's former home. But, Rott had struck a deal he could not undo. But as Sandra Tew of the Marceline had cursed the undead to stay in that location, Rott could not deliver the promised armies to Jolly, and so he was enslaved into serving Jolly.

He had a life-long grudge against Captain Walter, whom he considers his worst enemy. This was because Walter confronted Rott on his part in the fate of Minertown.

It is unknown if Rott betrayed the other members of Casa de Muertos into Jolly's service or they went willingly.

However, the mortal Rott was involved in bringing an entire army of Undead around the time of the Battle of Padres, to Los Padres. It was unknown whether the rest of the Casa de Muertos were part of this army. The hordes marched on to the island led by Ezekiel, only to be stopped by Walter. A fierce fight arose, engulfing citizens, pirates and soldiers of the Royal Navy. In the end, and at much expense, the Marceline won; the entire army of Undead was defeated, while Rott himself was killed by an unknown pirate.

This was not to be the end of Rott, though. Jolly Roger resurrected him from the dead: his debt to Roger was still to be paid.

This mysterious and dubious crew landed up on the shores of Port Royal with huge stocks of gold to make wandering pirates offers to do several favors for them. They asked the pirates dig up a number of artifacts and hand it over to the guild. These artifacts were kept in Port Royal long ago by mystic Tia Dalma and other voodoo practitioners to keep off Jolly Roger and his army from entering the city.

The Casa claimed that their 'sponsor' was a supernatural artifact dealer. They also paid more money for stealing the Royal Navy's defense plans ( "in case of a French or Spanish invasion" ) and for drugging Navy soldiers. After their deeds were done, they left and assured pirates of good things to come.

This would eventually lead to a horrifying Invasion of undead troops. 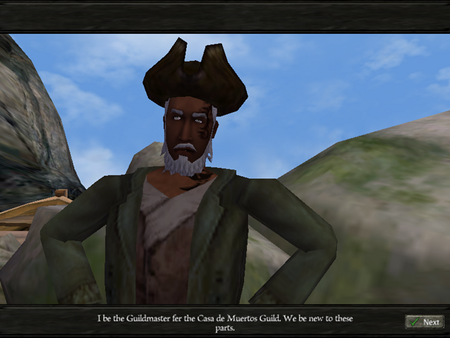 Appearances Since the Invasions

Rott and his men were given what they were promised - immortality. In spite of this, Ezekiel Rott still serves Jolly Roger. He had appeared during the invasion of Port Royal where he ordered the undead to kill the pirates or "Jolly will have all our heads!". He even revived a knocked out person, showing the gentler side of Jolly Roger, to inspire more pirates join.

Before the Tortuga invasion, he appeared and offered pirates a parley - to serve Jolly Roger, which was turned down by many pirates. He warned then of further invasions and a powerful weapon of Jolly Roger to unleash his wrath (some sort of new weapon, which was revealed to be Powder Keg Runners). He even knocked out a pirate who attempted to kill him. This was followed then by the Tortuga invasion.

He has made several appearances since, especially in Cave Raids. Members of the Casa de Muertos Guild seem to have no qualms about openly supporting Jolly Roger and serving alongside his minions.

Jolly has asked Captain Rott to once again hire pirates to do his dirty work in the El Patron's Lost Weapons quest. Members of the Casa de Muertos guild began spying on the EITC and Royal Navy on Padres del Fuego, trying to find out what they know of the stashed hoard that El Patron saw fit to hide. When he found out that the weapons were actually on a mysterious island named Raven Cove, Lord Cutler Beckett also gained knowledge of this through his spies, and broke down the simmering alliance with Jolly Roger, by launching his Expedition Fleets to the Cove. However, recently the Marceline guild exposed Rott's history and his connection with Rat's Nest. But something still smells fishy, as the Marceline's Captain Walter has once again disappeared.

Not long after the disappearance of the Marceline's leader, Sandra Tew began to have visions of Walter dueling with Rott aboard Walter's ship - The Magic. Discovering Rott's whereabouts, members of the Marceline guild and several other pirates confronted Rott on Cuba just outside the tavern.

He admitted their confrontation on the ship, as it departed from Tortuga to battle the EITC's Treasure Fleets and that Captain Walter met his fate under Rott's blade. He claimed that it was a fair fight and that Walter lost due to weak handling of the Cutlass, but this was proven wrong when Sandra Tew pointed out that Walter was a master swordsman. However, later some pirates began to see a visage of Walter's ghost. He spoke of some hidden truth that the pirates had yet to uncover.

Rott can now be found on Padres del Fuego, flipping a coin behind the Shipwright manager (not the Shipwright building) of the main town. Captain Rott continues to give El Patron's Lost Weapon quest to players who haven't done it. For players who have done it, it may seem as though he is just randomly standing there, for something new and evil to appear so that he can take advantage and start another nefarious scheme.

Retrieved from "https://piratesonline.fandom.com/wiki/Captain_Ezekiel_Rott?oldid=330500"
Community content is available under CC-BY-SA unless otherwise noted.