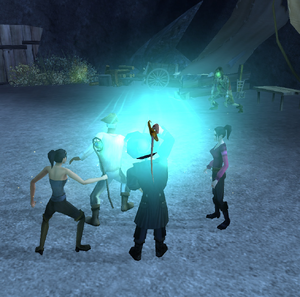 The Captain's Resolve Break Attack is a special weapon ability that allows a pirate to use his inspiring influence to help nearby allies keep their fighting spirit up. It is similar in a way to Nature Aura, but Captain's resolve heals a large amount instantly instead of a slow, constant, small amount of 30 HP. The only weapons that can use this skill are in the Admiral Group. Weapons with the Captain's Resolve Break Attack also have a higher value than most weapons.

These weapons all have the Captain's Resolve ability.

Retrieved from "https://piratesonline.fandom.com/wiki/Captain%27s_Resolve?oldid=325685"
Community content is available under CC-BY-SA unless otherwise noted.