Hey fellow pirates! It's me again Capt. Cutlass, and this is my guide on how to fight with guns and swords. Take a look and read my guide and it will benefit you for future fighting with higher leveled enemies like inside Isla Tormenta and Padres Del Fuego.

Now the first thing that you need to know is how to fight with swords. In this segment, I will teach you the ways of the mastery of the cutlass, broadsword, and saber. After all, my name is Capt. Cutlass.

First up is the cutlass. Now the cutlass is a pirate's best friend. It strikes fear into the enemy especially if you have a legendary cutlass. The thing that you need to know about the cutlass is that it is a close ranged weapon for fighting one enemy at a time. I suggest that you not take on more than one or two people while using a cutlass because that is more for the broadsword. Your best attack with the cutlass is your thrust at the end of your combo attacks. The thrust can deal from 800 up to 4500 damage. The most important thing when using swords is to never miss the strike because that lessens the damage by a lot. The best cutlass in the game is the Thunderspine Sword. That is the only sword that is able to reach 4500 damage on a thrust. My favorite Cutlass is the Seven Seas Cutlass. The reason why I like this cutlass the most is because the name just has a nice ring to it and I personally think it was hard to find. My friend had it before me and he bragged about it all the time, so when I got it, I rubbed it in.

Ooh! The saber is one of the most lethal types of swords out there with their deadly stabs. Sabers are also very delicate swords so HANDLE WITH CARE! The thing that you need to know about the saber is that it is the type of sword with the least amount of attack, it can hit enemies from longer ranges than the cutlass, and that it is used for duels with one enemy. Your greatest strike that your saber has in my opinion is the reverse spin cut. This is because with most of the sabers, a lot of them boost this attack. This attack can grow really powerful. My personal favorite saber is the Doom Stinger saber. It is brothers with the famed cursed cutlass Doom Rattler and cousins with the famed cursed broadsword Hull Ripper. If you have all three of these famous cursed blades, then you are set for life with the terrifying trio.

Oh yes! This is my favorite part. The broadsword is my absolute favorite type of sword to use. The reason being, it can attack multiple enemies at once. The things you need to know about the broadsword is that it is very deadly, it can be a far ranged weapon for a sword, and it can strike multiple enemies at once! I don't know about you, but this is my favorite type of sword. The best broadsword in my opinion is the Behemoth Blade. I know, I know! Some of you people prefer the World Eater Blade and I can understand that. The reason why I like the Behemoth Blade better is because I like to have lots of health and it boosts your endurance by five. If you are like me then you already have your endurance at the max, but this blade can not only make your endurance ten, it can also turn you into an orange ghost which I like better than the Lost Sword Of El Patron's ghost form.

Now the second weapon that I'm going to teach you how to fight with is the guns of the Caribbean. There are three types of guns: flintlocks/repeaters, muskets/bayonets, and blunderbusses.

First up are the pistols. There are two types of pistols: the flintlock which is a one shot pistol and the repeater which can be a three or four shot pistol. To be good with pistols, you have to be quick and accurate unlike muskets or blunderbusses which take forever to load. The pistol is a medium ranged weapon. When aiming at a target, you want to make sure to let the white circle (your aim) turn red then fire. What I have recently found out in the studies I have made is that if you are as far away from the enemy as possible while the circle is still red, then it will take more damage off. I'm not entirely sure about that, but that is what i believe. My favorite pistol is the Skullbone Repeater. This is because it has a critical strike chance, it has infinite venom shot, and it has plus three to bane shot.

Whoa!!! These things really pack-a-punch! A blunderbuss has a very short range and it takes the longest to reload out of all the guns. But there is a perk to this. Blunderbusses deal lots and lots of damage to foes and they usual kill enemies with one shot. Also, they can hit as may as five enemies if they are lined up! The most damage that I've seen a blunderbuss take off was about 15,000 health and that was with the War Scatter Gun with a critical hit. The best place to use a really good blunderbuss would be the South Idol in the Raven's Cove mines. There are four ghosts there that are all in a line, but it does take some practice to hit them all. The blunderbuss that I would suggest to you is the Grand Blunderbuss which is my personal favorite.

Now for the final set of weapons in the gun category and they are the musket and the bayonet. Lets start with the musket first because there is not that much of a difference between the two. The musket is a very long ranged weapon that can hit enemies from afar. There are some bad sides to this weapon as well. You cannot hit more enemies with one shot like the blunderbuss. I sometimes call the musket the hybrid because it takes off more damage than the pistol, but less damage than the blunderbuss. The perk is that you can be a long ranged help to other players fighting bosses. Think of it like you are the archer of the army. My favorite musket is the hex breaker musket. I like this one because you can completely deplete the enemies voodoo and it has infinite hex eater shot. As for bayonets, they can just give you the ability to stab the enemy up close so you can actually fight the Navy without breaking the code! Cool huh...

So this is the end of my guide mates it was nice talking to you. I hope you found this guide helpful and make sure to write comments so i can make changes to this guide. Be savy mates. 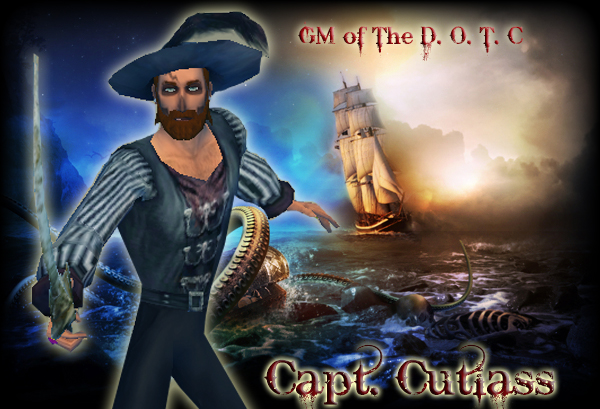 Retrieved from "https://piratesonline.fandom.com/wiki/Capt._Cutlass%27s_Guide_to_Fighting?oldid=321354"
Community content is available under CC-BY-SA unless otherwise noted.