Cannons of the Deep

Note: This game is no longer available and the collections can no longer be obtained. 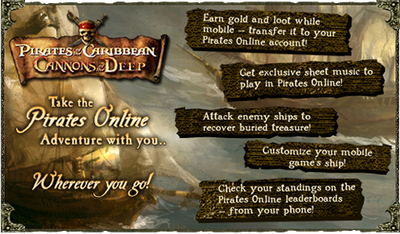 "In an era when lawlessness prevailed, the Caribbean was a hotbed of pirating. Every island a potential base - every cave a place that held untold riches - a time when adventure was just over the horizon and death not far behind! These are the times of Pirates of the Caribbean - Cannons of the Deep mobile game, where naval attacks, parlays, pillage and plunder was just another day's work for many hearty souls in the islands. Now you can play, and be part of the myths and legends of old. Don't wait, mate, get the game today!

Sailing across the vast, blue Caribbean sea between three major islands, you can earn fame and fortune attacking Navy and Merchant ships, parlaying with their captains and recovering buried treasure. This text-based mobile game has all the excitement and thrills as Pirates Online, but now you can take the adventure with you wherever you go! Fire on ships, take their loot, dig for treasure ... but beware, you can sink as well. Enjoy keyhole mini-games with great rewards like sheet music which can be handed to a tavern musician in the online game!

Live the legend, captain the crew of a mighty vessel, and when you're done, transfer all the loot you've earned to your Pirates of the Caribbean Online account! Even if you don't have a PiratesOnline.com account, you can play it as a stand-alone game, or link the mobile game with your online Pirate. Either way, adventure awaits all ye who be brave enough to venture into the water."

The game is played as a browser game. It can be played on your PC, Mac, or your cell phone. The ships are customizable and there is a wide variety of enemies. Throughout, the player has to travel to places found in Pirates Online, each with its own different market for ships. The places are :

The enemies have to be defeated with a setting of the aiming of Broadsides (any degree of angle between 0-45).

Game Note: You do not need to log in to enjoy Cannons of the Deep. Just be warned - gold and treasures earned in the mobile game will not be saved without a Pirates Online account.

After you've logged in, you can check your Pirate's status for the online game or transfer gold you earned in the mobile game to your online account. The "My Ship" button lets you upgrade cannons, hull types or figureheads to improve your battle skills. You can also make repairs to your ship, if need be.

Missions - explore one of three islands: Port Royal, Tortuga or Padres del Fuego. You can patrol for gold and loot or go straight to a battle with enemy or merchant ship. There are also mini-games that earn you small amounts of gold by directing your ship to different islands or you can change locations to access different ship upgrades and treasure drops.

Ship-to-Ship combat - Once you decide to go on some seafaring missions, you have the choice to "Hunt & Battle Locally" or head off to other ports. Battle Locally means you're ready to do battle with an enemy ship or plunder a rich Merchant vessel. Once you make this selection, a new screen will tell of your ship's status. If you're in perfect condition - get ready to battle. If you're in need of repairs, it would be best to make those repairs before attacking. When you cross a possible target you'll be alerted that, "An enemy vessel..." What to do? You can select from "Attack", "Parlay", "Let the Crew Handle it" or "Flee Battle".

Attack - Will get you the most gold, but, it might be wise to use other methods to win the day and stay afloat. Parlay - Will garner less rewards but no damage to your ship will be sustained. Let the Crew Handle it - If you are confident in your crew members, select this option but don't be upset if your ship is lost. Flee Battle - It may be wise to show your lily-livered side and flee from an enemy. If your ship is damaged, it's best to choose this option and avoid sinking into the ocean's depth.

Combat - Firing upon a ship is a matter of selecting the right cannon angle. Too much and you get a message that it went flying over the deck - too little and your shot went into the drink. Adjust your angle using the numeric keypad on your phone and shoot again. Hopefully, you'll sink 'em on this round! You can also select the firepower you want to use. When the battle has ended, you'll be shown whether you've won or lost the day - and what damage your ship sustained.

Mini-Game Missions - Attacking is not the only way to play this game... you can travel to islands and earn pieces of gold by having your crew intimidate another ship into paying ransom not to be attacked. These are known as the Cannons of the Deep Mini-game missions. They are passive but still fun to play and can earn you fine rewards!

Pirates Online Connectivity - You can also check your status on the Pirates Online game. Check out the daily Leader boards, survey your standings, transfer gold and other loot you've earned on the mobile game to your Online account. You can even see how many poker and blackjack hands you've won! It's another way to stay on top of your favorite online game, if you're at work, at home or commuting - anywhere you're without your computer but can get phone access - you can now stay abreast of your Pirates Online play instantly!

Unicorn Special Ability: Lowers time it takes to get between islands to 5 minutes. Cost: 100 Gold

Neptune Special Ability: Allows player to instantly move to one other island. (Limit use to once per day.) Cost: 1000 Gold

(These 5 different pieces of music; you can request to hear the new music for 5 gold in the taverns after transferring it to your POTCO pirate.)

Text "PIRATES" to the number "DISNEY (347639)" to play Cannons of the Deep exclusively on your mobile phone. You will receive a text message in return with a link, click the link to being enjoying the game or simply enter www.PiratesOnline.com into your phone's Web browser.

The game is available at no cost. Please note: Carrier charges may apply for sending and receiving text messages and for data usage accessing the mobile Web. You must have a data plan with your carrier service provider to access the mobile Web. Please contact your mobile service carrier in regards to questions about your service plan.

3) What phones are compatible with this game?

Any mobile Web enabled phone with a data service plan associated. Contact your carrier for specific handset or feature availability.

4) Can I play Pirates Online with my phone?

No, Cannons of the Deep is a different text based Pirate adventure meant to be an extension of the Pirates Online experience.

By logging in via the mobile game using your Pirates Online Account ID and Password, you can always access your Pirate information. You will be able to access your Pirate's stats and the Community leaderboards, as well as play Cannons of the Deep to earn items that enhance your online experience.

6) If my ship gets sunk on the mobile game, is my Pirates Online ship sunk too?

No, ships sunk on the mobile game do not damage your Online ship fleet.