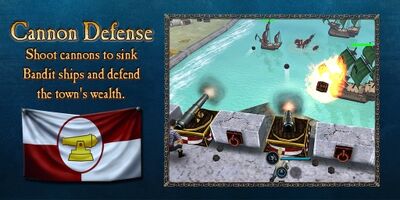 Cannon Defense is a mini game where the player defends Port Royal, Tortuga, and Padres Del Fuego from invading Bandit ships by manning cannons located on the Walls of the Fort. When a player loses or quits the minigame, the Cannon Defense level resets back to Level 1.

To play (join or create a game), approach a Cannon Defense location. There will be a Cannon Master outside the door (Basil Calledougal for Fort Charles, Geoffrey Bridgebreaker for Tortuga Graveyard and Rusty McGinnis for Fort Dundee). To start the game, approach the Cannon Master and press shift. Then select play Cannon Defense. Not all the time will you be able to get into a game straight away, there may be other pirates manning the four guns that can be used so you will either have to be patient and wait for a space or go to another island where cannon defense is located and play there. 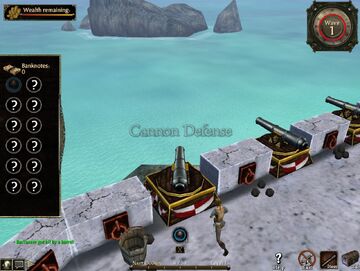 Once inside the fort, the pirate is assigned a station on a cannon and can then fire on the incoming ships as they approach shore. Up to four (4) pirates can play at the same time and a pirate can join the gun crew at any time - if it's not full!

Just like with operating a deck gun, use your mouse to target and fire. Remember that since you are higher up than on a pirate ship, cannons will shoot ammo farther. It may take some time to adjust to shooting at a higher elevation. If you have more than Round Shot ammunition, use your keyboard to select the type of ammo. You can also SELL back ammunition you've bought.

Also, you can receive other loot rewards as well, such as potions, tonics, Navy weapons, and cannon rams.

The ships will come from the right and head to the town on the left. If they reach the town, the ship will steal some of the town's treasure and then try to get away. 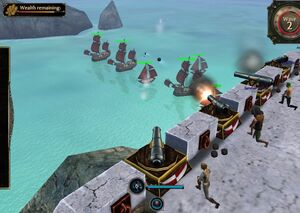 If ALL of the town's treasure is stolen, you lose. Once all ships in the wave are complete, players are rewarded. Money earned can buy specialty ammunition. The less that is stolen, the higher the reward. You can also earn items like tonics or cannon rams. 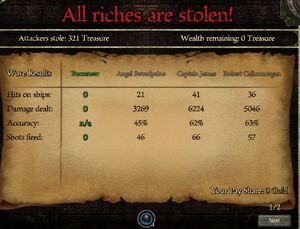 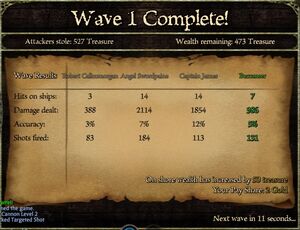 Stats are kept between rounds and at the end of the game, so pirates can compare their accuracy, damage done, as well as how much treasure was saved from the raiders.

Also take note that the higher waves you go, the higher your stats will be, due to the higher ship levels and more ships coming.

In The Legend of Pirates Online, a 90-second rest period was added after every 10 waves. Unless, all the gunners click READY, then the game jumps right back into the action. Just the thing to grab a quick drink, hit the head, or give your trigger finger a break.

Some ships, mostly frigates and a few warships, will fire back once they are fired upon. They launch a powder keg up at the wall, aiming at the cannon stations. They are slow enough that you can shoot them down and you'd better! If struck by a keg, your pirate is knocked off their cannon and becomes Groggy. To wake up, you must quickly move your mouse around to revive. Then, you can rejoin the battle. During heavier waves, especially the all-frigate waves, kegs could be coming from all directions.

You earn Navy Cannon skill as you play, but it is ONLY for that game - the skill is not used outside of the game. As you earn skill levels, you get new ammo types and the ability to store more than one type of ammo. But, you still have to buy special ammo from the banknotes you earn from defending the town.

Also, as you level additional slots open up to add a big variety of ammunition.

Below is the soundtrack played while playing the Cannon Defense Mini Game.