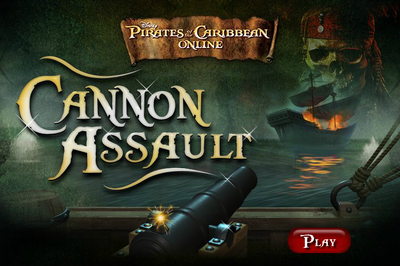 Pirates of the Caribbean Online: Cannon Assault is an in-browser game that can be played on Disney's Site. Play through numerous levels and earn Codes that can be redeemed for gold in Pirates Online. The code will give you 500 gold.

Captain Jack Sparrow at your service! Have all you scurvy scallowages logged in yet? Once you do, come aboard the ship and sail the salty seas in search of pirate's booty.

Fire the cannon, sink enemy ships and survive the missions to win! The prize?

A code to redeem gold coins in the most explosive virtual world on the web: Pirates of the Caribbean Online! But you must be logged in to earn this code!

Just keep your boat afloat matey, 'cause after all...
Dead men tell no tales. 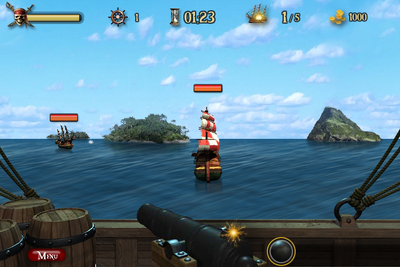 Chat said: Wantin' to be a pirate, ey? Ain't easy. Straight off, let me spell out yer assignment - man the cannons! Savvy? We're off to Devil's Anvil to pay a visit to that scoundrel Barbossa, holed up in a cave. Suits him well, I'd say. Ready yer self and keep a steady hand mate. Steady as she goes...

Chat said: Name's carver. That was some fire cannon work. Ye catch on quickly. We're off fer Driftwood Island soon...so keep a wary eye for East India Trading Company ships. They're well made crafts so hammer 'em with all ye got!

Note: Grappling hook is given on this level.

Mission Given By: Gunner, Cheif Cannoneer

Chat said: AHOY, MATE! THEY CALL ME GUNNER! I BE THE CHIEF CANNONEER ON THE PEARL! SORRY FER THE SHOUTIN'. LOST MOST ME HEARIN'. COMES WITH THE JOB! KEEP A LOOK OUT FER SOME WELL- ARMED RIGS IN THESE WATERS. SEEMS THEY CAN SMELL BLOOD FOR MILES AWAY! STAY SHARP...

Chat said: Yer makin' quite a reputation for yer self, I'd say. Name's Gordon Greer, ships purser. Now, here's the plan...we're slippin' into...Port Royal under cover of night. It's the Navy's headquarters so we don't wanna be drawing attention, ey?

Note: Firebrand is given on this level.

Chat said: Good work on that last mission, mate. Nill Ofrill, at your service. This next mission will test yer mettle, it will. I reckon we be headin' to a...scrappy little island called, Isla Tormenta. Cpatain Jack's got a score to settle with the crew of Davy Jones himself.

Chat said: Blimey, I don't fell well...sorry mate, I...gets sea sick. Lanndlubber at heart. Shang-hi-ed by Jack and I rue the day...now, they call me Doc Grog. But as far as your cannon skills, a word to the wise... always be the first to fire. That's how ye stay safe.

Chat said: Halo, mate. Hendry Cutts. Ships Dowswain. Sorry it took me a bit to welcome ye but I stay plenty busy on the Pearl I do. We're off to Padres del Fuego to smuggle gunpowder out. But be warned some vessels 'round here are quick as lightnin'.

Note: Lightning ammo is given on this level.

Chat said: Shhhh! Don’t let on I said this, but I overheard with me own ears Captain Sparrow and Mr. Gibbs tell of this mission – seems Captain Sparrow made a deal with the undead... Spanish on this blackwater island. We be trading ‘em weapons for safe passage in this area… only thing is, the weapons ‘re worthless. Ole Jack is a double dealer, he is!

Chat said: Name’s Giladoga, a nickname given by Captain Sparrow himself ‘cause he can’t say me given name. So, you’re getting’ pretty savvy with that cannon. That’s good ‘cause we are about to head into some murky water…murky with blood that is. But jack needs something in Kingshead – of off we go.

Chat said: Yes. It was I that Captain Sparrow rescued, though I did do my part, fending off three Navy guards with a rusty cutlass. Thanks for your part in securing my freedom. Now that I’m free of that entanglement, I will accompany the Pearl to Isla de la Avarica. Help us get there safely and I’ll be eternally grateful.

Chat said: Right, that didn’t go as planned, but Elizabeth did manage to secure my release, since I was unlawfully detained by that drunken, Avaricia. We’re off to the… French privateer base, Ile de, er, sorry my French is poor, just call it, de Porc. Here’s where you come in…there are some top-of-the-line skeleton ships lurking about there…waters. So please, or the love of all that’s good sink them all, mate. Show no mercy and you’ll earn all of our undying gratitude. We’re counting on you.

Chat said: Oh, it’s you. And your name is? Sorry mate, bad with names. But I know a good cannoneer when I see one and you are indeed – a good cannoneer that is. So this last leg of our little voyage should be like a Sunday sail in the harbor. We’ll breeze back to Tortuga, Shang-hi some new crewman, and off we go on our next…excursion. Good serving with you mate. Fair winds.

After you finish the 12 missions, at the end of the game you will receive a unique code to use in game! Redeem it for 500 gold. 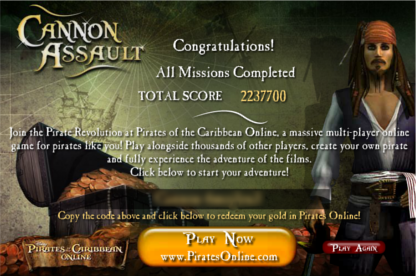 Note: To take advantage of the Gold Redeem Codes, you must be logged in!

Retrieved from "https://piratesonline.fandom.com/wiki/Cannon_Assault?oldid=319756"
Community content is available under CC-BY-SA unless otherwise noted.