They function by using gunpowder to hurl a projectile, usually something heavy, flammable or explosive at their target.

In Pirates of the Caribbean Online, cannons are used by the pirate to sink other ships or to defend their own. Ships also carry a complement of broadside cannons below deck that can only be fired by the ship's captain. 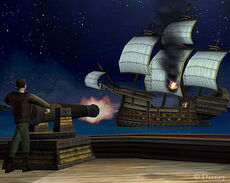 All ships carry deck guns (except fishing boats), which can be easily accessed by simply walking up to a gun station and pressing the Shift key.

The pirate's point of view will change to 1st person, showing the cannon in front of you.

To target, hold down the right-mouse button and move the mouse in any direction, or use the direction keys on the keyboard. Left and Right, then Up and Down to elevate the gun. The higher the barrel points, the farther it will shoot. However, different types of ammunition will have different ranges and damage can be affected by using a cannon ram.

Press CTRL or Left-mouse button to fire, or if you are using a laptop you can also tap the mousepad.

Once a barrage is fired (up to 3 Rounds), the cannon will "cool down" while being reloaded. The time it takes will depend upon the pirate's Rapid Reload Skill and/or cannon ram. Reload times for Grape Shot and Explosives will take the longest and only one round can be fired per load.

Cannons will automatically load the last type of ammunition fired.

Although Ship Customization has been released, no new cannons were released along with it. The following items may still be released in a future update, however.