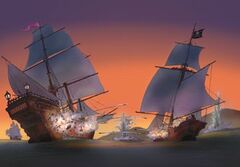 from your screen while you are sailing. Your broadside guns have a limited angle of fire from the sides of the ship. Because of this, you must try to have your target to the left or right sides when firing. Your broadside gunners will automatically fire on the closest enemy ship. Also, the lower-deck cannons are only medium range. If an enemy is not close enough, the shot will go in random directions. 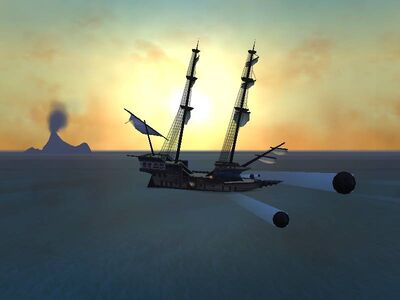 With the Ship Customization update you can purchase upgrades, which offer a chance at firing a different broadside.

In Pirates of the Caribbean Online, only the player helming the ship (does not have to be the actual owner) can fire a broadside. When they select the Left or Right broadside guns (by pressing 1 or 2), all of the below deck guns on that side fire. The amount of damage done depends on the pirate's Sailing Skill and Broadside ability level and the size/class of the vessel. The damage of a broadside also increases depending on how strong your round shot is.

Sloops carry the fewest, while Galleons carry the most for each class.

When you use Left Broadside your pirate will say; "Broadside port!!!"

When you use Right Broadside your pirate will say; "Broadside starboard!!!"

Retrieved from "https://piratesonline.fandom.com/wiki/Broadside?oldid=337900"
Community content is available under CC-BY-SA unless otherwise noted.