Brawl, when activated, gives the enemy a very brutal head-butt. The attack itself deals relatively low damage, but stuns your enemy for a few seconds, which disables them from attacking or moving. This skill is useful for a quick getaway. 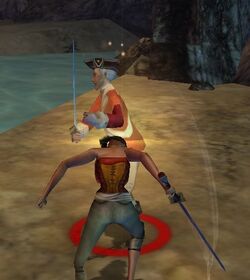 Increasing this skill increases the damage done and the duration of the stun. Unlocked at Sword Skill - Level 8

To use Brawl, have a sword out and press 2 or click the

Retrieved from "https://piratesonline.fandom.com/wiki/Brawl?oldid=330283"
Community content is available under CC-BY-SA unless otherwise noted.