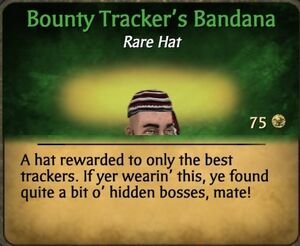 The Bounty Tracker's Bandana is a rare Bandana that can be worn by both males and females. It is only obtainable by finding at least five of the Bosses listed in the Most Wanted category during the Most Wanted Event, which took place between July 3rd and July 31st of 2019. To receive credit for finding a Boss, one would have to go on the wiki and post a picture of the boss that they found, with their pirate name, level, and guild name in the comment section of the article of the Boss that they found. After finding five Bosses, they would then receive an in-game redeem code from a Pirates Online Wiki admin that only they could use. Anyone seen wearing this is an adept Boss hunter.

Retrieved from "https://piratesonline.fandom.com/wiki/Bounty_Tracker%27s_Bandana?oldid=340704"
Community content is available under CC-BY-SA unless otherwise noted.