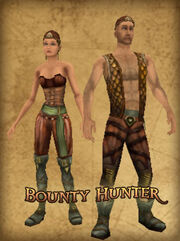 Bounty Hunter is an outfit offered for purchase by Peddlers on Padres Del Fuego, Cuba, Port Royal, and Tortuga. Peddlers offer clothing that will only be available for a limited time (2 months). The outfit was first leaked the morning of October first, but was taken down and later released as a 5th Anniversary outfit on October 10th. It was leaked an additional second time on October 23rd as well.

Retrieved from "https://piratesonline.fandom.com/wiki/Bounty_Hunter?oldid=339668"
Community content is available under CC-BY-SA unless otherwise noted.