The Blood Scourge is a class of War Sloop flagships in the service of French Undead or Spanish Undead fleets. It is considered to be the most powerful undead flagship in the game.

These vessels can be found around Cutthroat Isle (Spanish) and Isla Cangrejos (French). Like other Undead war sloops, they carry four deck cannons and seven broadside guns on each side.

They attack with Thunderbolt rounds for deck cannons and Firebrand rounds for broadsides.

They have the most elite skeletons in each skeletal nationality, usually made of of Capitans and Capitaines, and Piratas and Lieutenants. 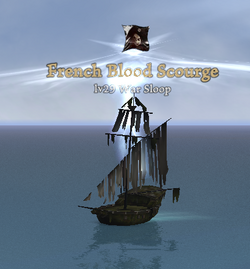 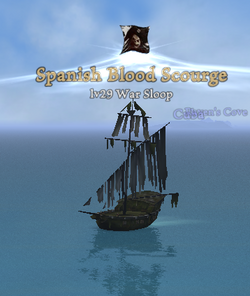 Retrieved from "https://piratesonline.fandom.com/wiki/Blood_Scourge?oldid=322830"
Community content is available under CC-BY-SA unless otherwise noted.