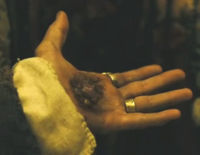 The Black Spot is a mark of death to a pirate.

It was originally a proverbial term applied to a pirate who has a death mark by the authorities or other pirates for misdeeds he must pay for with his life. In the case of other pirates, it is said that they would be handed a notice or piece of black paper or cloth, letting them know their shipmates plan to carry out this final punishment.

In Pirates of the Caribbean, the Black Spot is a supernatural marking that appears on a pirate doomed to Davy Jones' locker . Any pirate that gains it will be followed by Davy Jones's pet, the Kraken and pursued to the ends of the Earth. Any member of the Flying Dutchman's crew can be delegated to bring the Spot on the target of the curse, but only Jones can remove it.

Warding off the Black Spot

There is no known protection from Davy Jones' black spot, other than to pay your debt to him. But, pirates believe just being in the presence of an infected person is bad luck enough and with good reason.

When the Black Spot is seen, you need to:

The "Evil Curse of Doom", something similar to the Black Spot has recently been discovered. After defeating El Patron as part of the Raven's Cove Story Quest, the pirate can find cursed swords, but using them apparently exposes them to the curse. By entering the emote /hand, the pirate will find out if the curse has taken hold of them. The player may possibly acquire it when they use a Cursed Blade.

Nothing is known for sure beyond this point, except that it bears similarity with the Black Spot. No one is even sure what the curse does to those infected.