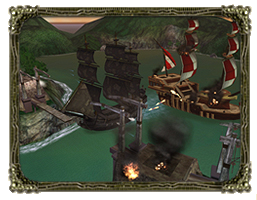 After completing The Black Pearl Crew Story Quest, you must then complete your first Boss Battle. This is also the first and only Treasure Map that the game has for pirates. However, there are many other types of Boss Battles throughout the game, such as the El Patron Boss Battle. 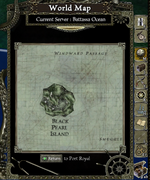 Having gathered the crew and forged papers needed to slip aboard, the mission starts with two navy soldiers, Mullroy and Murtogg, getting distracted while you and your crew sneak onto the Pearl. The Pearl is located in a Navy fortification on a secret island known only as the Black Pearl Island. The pirates now have to break out of the island, facing the Goliath and its 18 powerful cannons, which the two cadets, Murtogg and Mullroy, have clearly pointed out. However, if there is a Treasure Fleet at the moment, the map will show the fleet route past the island. But it is not known if this is at the beginning or end or the fleet's route.

Before you can captain the Pearl, you must eliminate the Level 28-40 Navy Officers guarding her deck. There are about 5 to 7 of them.

Hint - At least one pirate should use voodoo staff or Broadsword to attack all of the officers at once. Also, one or two higher levels could volunteer to use voodoo dolls to help keep party members healed.

After all guards are defeated, you will need to choose a highly skilled sailor to take the Helm of the Black Pearl.

As the Pearl sails towards the bridges, four Royal Navy Panthers with unusually stronger hulls will appear and grapple you. The Pirate sailing will not be able to keep a hold of the wheel and should take a cannon, because of this, there will be no broadsides.

They are not hard to sink, but they can do a lot of damage if you're not quick. After the last one is sunk, you can take the helm again. But, the forts will immediately open fire.

Hint - By turning sideways each time, you can bring the broadsides to bear and, if need, switch sides to protect the hull.

This is, by far, the hardest part of the Boss Battle. Now, you must fight your way out of the harbor. There are two bridges and three Forts blocking the path. The two forts supporting a bridge must be destroyed to cause the bridge to collapse (meaning the middle fort and the left OR right fort must be destroyed). Also, numerous forts appear along the way and will shoot Firebrand rounds at the Pearl. You can bypass them, but they can attack you from the other side of the channel. Most often, it's best to destroy them before moving on. A good strategy is to wait for Open Fire and Take Cover skills to recharge before moving on to the next set of forts. The enemy forts must open fire on you for your cannon attacks to cause damage. Thunderbolts from long range deal no damage.

There is one last set of drawbridges to get past. These two forts have a large number of cannons that fire round shots. Once the bridge has collapsed, the Pearl will be free to reach the sea.

Hint - Having all gunners stay on one side, they can focus their firepower on the forts while protecting the far side of the Pearl's hull. Take Cover is very useful here, along with Open Fire to help your guns work faster. However, either one cancels out the other.
Hint - Using Open Fire and then quickly having all your crew use Explosive is a good strategy, then do Take Cover. 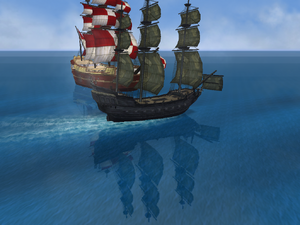 Once you are clear of the island, you will see the Ship Of The Line Goliath coming at you from behind the rocks. This powerful Ship will appear on your port side so make sure all your gunners are ready and waiting on the correct cannons on the correct side. It will take a lot of fire power to take down the powerful boss ship of the line. But, once she's done in - the Pearl is in the clear. Congratulations! After you have finished the Black Pearl Boss Battle you are required to go to Joshamee Gibbs and you get the Leadership skill for sailing the Pearl.

Unlike the El Patron Boss Battle, you can play the Treasure Map multiple times. Once you've gathered the crew and marooned Captain Montrose a second time, a new option will appear in the Lookout section of your Sea Chest: Treasure Map. Selecting this will allow you to play the boss battle again. If you have reached the end of the quest and join another pirate's treasure map, victory will gain you the Leadership skill.

Other Tips and Hints

Below is the soundtrack played while battling the Goliath.

Retrieved from "https://piratesonline.fandom.com/wiki/Black_Pearl_Boss_Battle?oldid=342087"
Community content is available under CC-BY-SA unless otherwise noted.