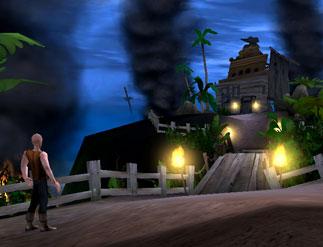 The Black Dog Inn is or was the lonely tavern on Bilgewater, the original version of Rambleshack island. It was owned and operated by Doggerel Dan and his wife, Nell Bilgehayes.

Originally, when the pirate escapes jail with the help of Captain Jack Sparrow, Dan and his wife are busy trying to flee from Jolly Roger.

They take time to give the pirate their Sea Chest and Quest Journal (Menu). The opening was later changed and the Black Dog Inn scene was removed. Players now go directly to see Will Turner.

Retrieved from "https://piratesonline.fandom.com/wiki/Black_Dog_Inn?oldid=337074"
Community content is available under CC-BY-SA unless otherwise noted.