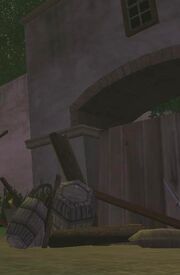 During an Invasion, the townsfolk of Port Royal, Tortuga, or Padres Del Fuego erect several makeshift blockades to prevent Jolly Roger and his minions from seizing the Governor's Mansion, Faithful Bride Tavern, or Padres Del Fuego Town (the official name for the Padres Town is Los Padres).

These barricades have limited health, which will drop as they are attacked. Once fully depleted, the barricade will fall and the invading skeletons will proceed to attack the next barricade as they march forward. To see the current health of a barricade, you can hit F8 for an overview of every one on the island, or, simply move closer to the barricade, and a gauge will appear in the lower right of your screen.

The more barricades that remain intact at the end of an invasion, the more reputation a pirate will be rewarded with. But if all the barricades are destroyed -- and Jolly's target destroyed -- Jolly Roger will win!

Retrieved from "https://piratesonline.fandom.com/wiki/Barricade?oldid=338412"
Community content is available under CC-BY-SA unless otherwise noted.