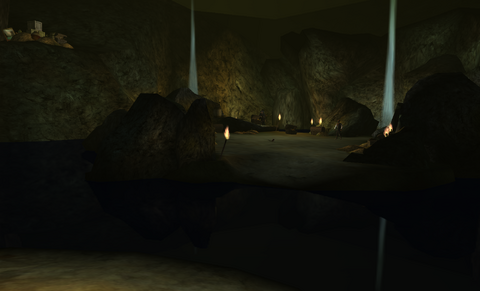 Barbossa's Grotto is a treasure-laden cavern and the hideaway of Hector Barbossa, Jack the Monkey, and Leon Warhawk. Since returning from the dead, Barbossa seems to want to keep to himself, but that doesn't mean he's unwilling to help a newly arrived pirate. 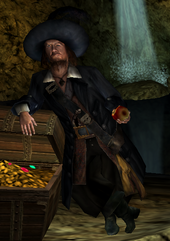 Barbossa gives the pirate their first pistol, in the Set Sail Story Quest. He also instructs them in the use of the pistol by using his pet monkey Jack for target practice. Thankfully, Jack is undead already.

Barbossa's Grotto is similar to the Gold Room on Isla Tormenta in which the treasure in the grotto is non-collectible and mere decoration.

The Grotto features waterfalls and the sounds running water. There is a small raised area at the center where Hector stands with his treasure horde.

Likely the space was meant to imitate the feel and look of the caverns on Isla De Muerta, the island hideaway where the crew of The Black Pearl kept their loot and the mythical Treasure of Cortez.

Retrieved from "https://piratesonline.fandom.com/wiki/Barbossa%27s_Grotto?oldid=337165"
Community content is available under CC-BY-SA unless otherwise noted.