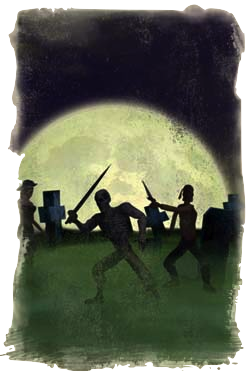 The Aztec Moonstone was a powerful magical object harnessed by Jolly Roger. He used this object to empower a spell that would bring a curse upon the Caribbean. This curse is called the Curse of the Muertos Moon (Spanish:Moon of the Dead), and usually occurs near Friday the 13th and Halloween.

During this period, the atmosphere would turn green and hazy, and any pirate caught in the rays of the full cursed moon would turn undead - forced to fight with each other until death. However, Jack Sparrow managed to thwart Jolly's plans by stealing the Moonstone. Without it, Jolly's black magic was weakened, ensuring that pirates could avoid the curse by staying inside when it struck.

The object might have been cursed by Aztec Gods, similar to the Cursed Gold of Cortez.

Retrieved from "https://piratesonline.fandom.com/wiki/Aztec_Moonstone?oldid=323097"
Community content is available under CC-BY-SA unless otherwise noted.