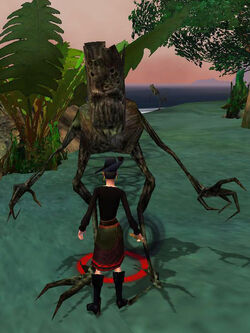 To connect an enemy or friend to a voodoo doll, so hexes can be used on them.

This is an ability to attune a target to use a voodoo doll on. The number of targets a pirate can attune at the same time, depends on their Attune level (1-5). When the pirate first received their doll, they automatically have an Attune skill of 1.

To use a voodoo doll, the user must touch it to an enemy or ally first.

This means the doll must make contact with the friend or foe first. A pirate just has to get close enough and press CTRL or left-mouse button. Once the target is attuned, they can have voodoo spells placed on them.

The name and health of attuned targets will appear on the right-side of the screen. Hex effects will be divided amongst the targets attuned.

If a pirate has a doll with the skill Evil Eye, he or she is able to attune one or more targets from a far distance.

Retrieved from "https://piratesonline.fandom.com/wiki/Attune?oldid=322577"
Community content is available under CC-BY-SA unless otherwise noted.