Starting in 2009, it became an annual tradition for the staff of Pirates Online to play a prank on players and pirates alike.The pranks might appear in-game, on the game's website or both.

Normally, any prank effects would be ended within a few days.

On April 1st, 2019, The Legend of Pirates Online announced that Padres del Fuego would be closing. You can read the Annoucement. Of course, Padres is still open.

The mustache prank also returned, along with a new A Fool's Facial Hair Quest being added featuring Jesting Jessica. The dancing jokester promises to help the pirate rid themselves of the unwanted facial hair.

On April 1st, 2018, The Legend of Pirates Online promised all pirates something special. A code LOSTSWORD which was to grant them a special weapon for fighting enemies in the new Forsaken Shallows area. It turns out the new weapon wasn't the Lost Sword of El Patron, or even a new cursed sword.

But a Tree Branch. However, pirates could use the Tree Branch just like a sword.

For April 1st, 2017, The Legend of Pirates Online crew announced they had completely revamped and overhauled Raven's Cove by reducing the size of the island and removing all of the enemies and quests.

This, of course, was just a joke and nothing had changed. Read more HERE

On April 1st of 2013 there was no known April Fool's Day prank on the pirates.

Every year so far, on April 1st there has been at least one prank going on, trying to humiliate the pirates! In 2012, the famous Mustache prank returned, and Pirates Online had a joke blog post about Chickens Invading the Caribbean:

Jolly Roger must be getting truly desperate in his bid to overrun the Caribbean. Not content with raising undead Pirates into his ranks, ol' Jolly has now resorted to cursed… chickens?

There's no way to know when or where these pillaging poultry will invade next. Unless of course you hear some clucking behind you. That's usually a pretty good sign that the chicken onslaught draws near.

Spread the word, mates, and rally ye Guilds! Defend those barricades against the menace of this fearsome, feathery foe that lives within Jolly Roger! Or just spread some corn and seed on the beach. That would probably do the trick as well to drive away the "Wrath ofthe Chickens." 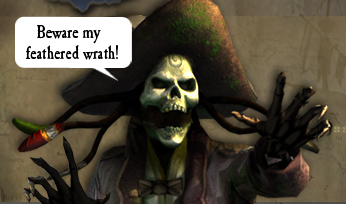 And don't worry - luckily Pirates will not be sporting mustaches this year for April Fool's Day.

If you sail into the Caribbean today, your stash of plunder isn’t the only 'stache your Pirate will see. Fortunately the hairy hoax lasts only through April 1st, and your salty face will return to normal at the end of the day.

On April 1st of 2011, the Pirates Online Team pulled a prank giving everybody, including female pirates, a mustache! The mustache appeared on your face no matter what. There was no possible way to remove it. If you had another mustache, you'd also get the prank one right on top of it! It did not remove your original mustache, which remained under your nose for the entire day. 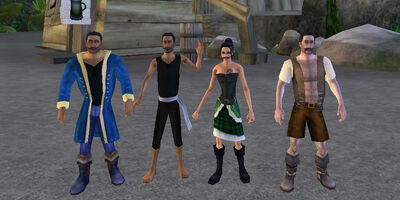 "A permanent change is growing in the Caribbean, taking effect on all Pirates - lads and lasses -- starting Friday!

Words can't do it justice. We "must ask" you to log in and find out yourself.

But one thing we can tell you: it's BIG!!

See you in the Caribbean! Only a fool wouldn't log in."

On April 1st of 2010 there was no known April Fool's Day prank on the pirates.

On April 1st of 2009 Pirates Online released their prank for April Fool's Day. Here is the complete text of the Pirates Online Current News released by POTCO on April 1st, 2009, titled "Prepare to Swab the Deck!" -

We're excited to introduce a brand-new weapon -- the Cannon Swab! It may look like a giant cotton swab but this harmless looking weapon is deceivingly powerful! In addition to helping you clean your ship (you've heard of "swabbing the deck"), the Cannon Swab can be used to ridiculously slow down your cannon attacks and reduce waxy buildup. To acquire the Cannon Swab you must first finish the Cannonball Quest Run. Using the Cannon Swab will earn you a Cannon Loading Skill. Here's how it works:

To use your Cannon Swab at sea, follow this simple 6-step process:

1. Address the cannon for inspection. For example, "Greetings Mr. Cannon, I will now inspect you." Once you've addressed the cannon, make sure the cannon is clean, and empty (this goes without saying but never stick your head inside a cannon). To clean the cannon, "swab" the bore. (To find the bore, refer to the owner's manual that came with your cannon.)
2. Pack your charge using the Cannon Swab. Do not "double load" the cannon, as double loading the cannon will make a MUCH louder and MUCH larger explosion than a regular single load.
3. Load black powder into the barrel using the Cannon Swab, making sure to push the powder all the way into the bore. To see if the powder is set properly -- a torch or match can be used to help illuminate the cannon bore (you may want to get your first mate to do this...).
4. (If you or your first mate are still alive after step 3) Load the charge and the cannonball, again using the Cannon Swab. (Be careful not to drop the cannonball on your foot. If the tip of the Cannon Swab gets caught in the cannon, use Doc Grog's Cannon Crude Remover to clean it.
5. Make sure the area in front of the cannon is clear and that Jack the Monkey hasn't crawled inside (or don't). Swing the Cannon Swab in a circle above your head, yelling, "Preparing to fire the cannon! Preparing to fire the cannon!" (Remember, during battle, it is proper Pirate etiquette to do this three times.)
6. Using the igniter, light the fuse to fire the cannon. Now secure your first mate and any other loose articles that may have shifted when you fired a double-loaded cannon (because we know you didn't follow Step 2).

To attack Navy Guards and other NPCs using the Cannon Swab, set the weapon in attack position and begin swabbing! 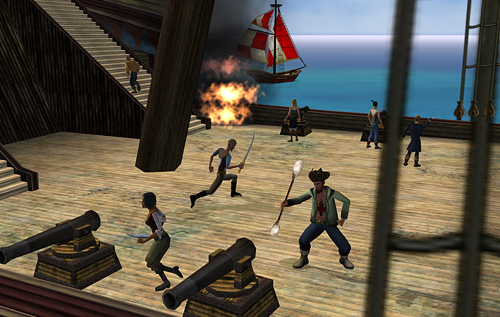 Other great uses for the Cannon Swab:

Retrieved from "https://piratesonline.fandom.com/wiki/April_Fool%27s_Day?oldid=332603"
Community content is available under CC-BY-SA unless otherwise noted.