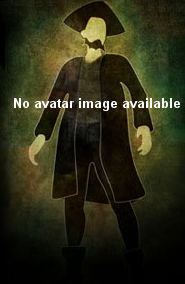 Amo Dorsi was a voodoo practitioner and supposedly a follower of Tia Dalma. When he was human, he had worked with Jolly Roger. He and Jolly Roger plotted to take Jack Sparrow into a poker game - hoping to win the post of Pirate Lord from Jack. However, their evil plot failed, and in a state of rage Jolly struck down Amo Dorsi to the floor with his pistol.

In his last words, he cursed Jolly Roger to walk the Earth for eternity as a skeletal being. This however, also resulted in Jolly attaining the almighty voodoo powers of the mystic, enabling him to forge armies of walking dead skeletons that scoured the islands of the Caribbean and captained massive warships, all to further Jolly's sinister goal - to conquer the Caribbean, and get vengeance on Jack Sparrow.

Retrieved from "https://piratesonline.fandom.com/wiki/Amo_Dorsi?oldid=326557"
Community content is available under CC-BY-SA unless otherwise noted.