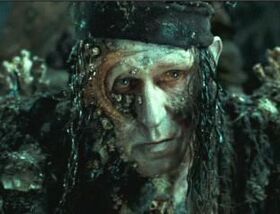 William "Bootstrap Bill" Turner is the father of Will Turner. He left his family behind to make his fortune at sea, but never told them he was going to go about it as a pirate.

Bill become a crewman of the Black Pearl, until after Captain Jack Sparrow was marooned on Rumrunner's Isle. Expressing his feelings about the incident to new captain Hector Barbossa, Bill found himself being ejected overboard. Barbossa strapped Bill to a cannon by his bootstraps and dropped it off the deck and into the depths. But, Turner didn't die.

He was found by Davy Jones, who offered the doomed sailor a tour aboard The Flying Dutchman to stave off death. After serving for years, Bill has become more and more part of the ship and forgot the life he left behind. Only the thoughts of Will gave him hope to keep going.

Pirates of the Caribbean: The Curse of the Black Pearl

Bill is not seen in the film, but rather talked about. His son never knew of his father's life as a pirate or his fate at the hands of Barbossa until he met Jack Sparrow - who recognized Bill's likeness in Will. Knowing that Will likely possessed the last cursed Aztec coin, Jack took Will with him to find the Pearl - hoping to get the ship back from the mutineers.

At first, when the Pearl arrived in Port Royal seeking the last coin, it was believed that Elizabeth Swann was the child they sought. The curse required blood from all involved or their decendants and Bill was long gone by this time. However, the blood ritual failed leaving the pirates befuddled as to who his offspring really was.

Later, the story of his father's fate was related to Will by Pintel and Ragetti, as they swabbed the ship's deck as he lay in the Pearl's brig cell.

Will added his blood to the chest of coins to end the curse, just after Captain Jack shot Barbossa.

Though now in the service of Davy Jones and all due to his loyalty to Captain Jack, Bill came to warn Sparrow that the Black Spot was upon him after 13 years as captain of the Black Pearl.

Later, after being used by Jack, the younger Will Turner found himself aboard the Flying Dutchman and face to face with his long lost father.

After an incident that required Will to be disciplined with a lashing, Bill offered to do it himself - knowing that the taskmaster would do far worse harm.

Bill confided in his son about the Dead Man's Chest and what it holds (Davy Jones' heart). He helped Will the best he could to retrieve the key. But, his eagerness to protect his son forced him into a game of Liar's Dice that cost Bill an eternity of service aboard the Dutchman.

Will managed to escape with his father's help, but Bill was forced to watch Davy unleash the Kraken on the ship that had pulled his son from the sea. The Edinburgh Trader was obliterated right in front of him, but Bill didn't know that William had survived the destruction.

Pirates of the Caribbean: At World's End

With his hope ever dwindling and his time aboard the Dutchman eroding his memory, Bill still continued his service to Davy Jones. This loyalty culminated in his murdering Admiral James Norrington as he aided Elizabeth Swann to escape from the Flying Dutchman.

Bill continued to fight for Davy, even against his son as the two mighty ships dueled in the maelstrom. But, then he sacrficed himself to ensure that William would not die at the hands (or claw) of Jones.

In the end, Jack Sparrow used his broken sword held by Will to stab Davy's heart - killing him and making William the new captain. In the end, Bill became human again and continued to sail with his son for 10 years.

As Elizabeth stayed faithful to Will, he was permitted to leave the Dutchman's service, but chose to stay in order to spend some more time alongside Will.

In the Pirates of the Caribbean: Jack Sparrow book series, a younger Jack Sparrow first encounters Billy Turner on a deserted island, hurt and suffering from amnesia. He can only remember his name.

While trying to find Poseidon's Peak Bill inexplicably can understand the native tribe. Fleeing the natives, they find themselves in an underground cavern, along crew of Jack's first ship - the Barnacle.

Turns out before losing his memory, young Bill had once sailed with Jack's friend Arabella and even developed a budding romance while they sailed on the pirate ship captained by Arabella's mother, Laura Smith.

Later, Bill helps Jack and the crew of both ships face the evil Captain Torrents, who is in possession of Poseidon's Trident.

Though Bill Turner was romancing involved with Arabella Smith, it is most likely that she is NOT the mother of William Turner.